The National Democratic Congress branch in the Akatsi SouthConstituency, Constituency, led by Mr. Anthony Kwadzo Owusu(Westfelia), (Westfelia), joined hundreds of the good people of Avenor at the third launching of Avenor Tutudoza. 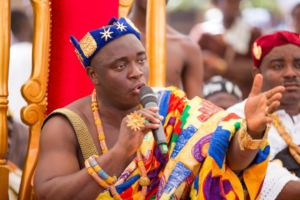 The Akatsi South NDC constituency chairman, Mr. Anthony Kwadzo Owusu(Westfelia), (Westfelia), launched the festival on behalf of Mr. Bernard Ahiafor, the member of Parliament for the constituency, who he said is in Belgium now on an official assignment on behalf of the country.

In a statement read on behalf of the Akatsi South MP, Mr. Ahiafor urged the youth to “exhibit the legacy of bravery and obedience that the Avenors were known for in the past.”

Mr. Ahiafor was grateful to the central planning committee for the theme of this year’s festival, which he said harmonizes efforts to unite his constituents and hence promote development.

In an interaction with the media, Mr. Samuel B.K Nugblega also opined that the unification would promote the unique cultural endowment of Avenor and build a stronger cohesion for the development of the area.

The event brought together chiefs, queens, and elders from the municipality and beyond to ‘Akatsi Market’ to witness the launching of this year’s edition of the annual festival, which comes off on November 26th, 2022.

The ceremony was chaired by Mr. Seth Aglago, a renowned politician and business tycoon, who also called on the sons and daughters of Avenor to project their ancestral culture and development of the area.

Government to cut salaries of Appointees by up to 30℅

Ghana is falling, and we can’t wait for the IMF – Duffuor.